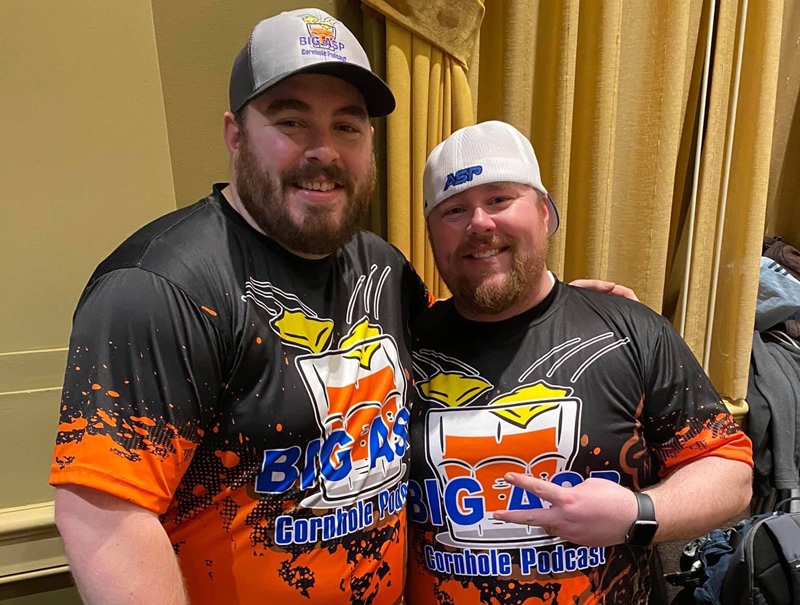 I am Sean Asp of the Big Asp Cornhole Podcast and I wanted to share our story of how we got started. This is my first attempt at writing, so be gentle and we hope you enjoy hearing the story behind the voices.

Countless stories I have come across have all sounded similar. “I started playing in my back yard with a buddy…I was the best…Blah, Blah, Blah”.

It was no different for me. Growing up, my brother (Dane) and I had played horseshoes and washers. If you have ever played washers before, you know it isn’t exactly a quiet game. The constant “ping” of the washer hitting the wooden board, echoing throughout the neighborhood, was enough to drive our neighbors crazy. We then transitioned to cornhole.

Ready to play in the big time, or so we thought.

We started out like most, playing with corn filled Duck canvas bags on “OK” boards. We would play others in the neighborhood and rarely lost…we thought we were cornhole kings. And then we played in our first “real” cornhole tournament.

About two years ago we entered a tournament at a local Irish festival, which was being run by Cleveland Cornhole. To say the least, we got our asses kicked…our pride was hurt, but the people we played against were awesome!! They told us about this “Cleveland Cornhole league” and to check out the website.  I stored that information in the back of my head.

Fast forward about a year, after the birth of my oldest child, Nora, I had given up coaching (I had coached a high school Rugby team for 7 seasons and would spend every weekend traveling around the country). I loved spending more time with family, but I wasn’t used to having this much free time on my hands. I saw cornhole on ESPN one weekend and I remembered our experience (as painful as it was) and checked out the Cleveland Cornhole website. Lucky for us, they were just about to start up another session! I called my brother, he was in…..the rest is history!

Family and friends who know me well will tell you, I am either “all in or all out”. After the first week of this league, I was hooked. We got a set of “professional bags” and started practicing. Dave Weiser, who runs the Cleveland Cornhole league, does a fantastic job at placing you in a division based off skill level. It helped us to improve our game without demoralizing us. We practiced, we got better and moved up. We are now in that awkward phase…some games we could beat anyone, but more often we lose.

I became obsessed with every aspect of the game. I couldn’t get enough. I would watch YouTube videos, read every blog on Cornholeaddicts.com and I would even read bag reviews for fun (don’t judge me). I wanted more…..

Then one day, before heading out to work, where I have about an hour commute, I looked on Apple podcast. Surely there wasn’t a cornhole podcast…right? But there it was, in all of its glory, the Doghouse Cornhole Dogcast! At the time they had two episodes available…I blew through them both in the first day. I couldn’t believe there were guys out there who loved cornhole as much as me!!

Who’s going to listen to our podcast?

Jump ahead again, about two months, it is now October, early November. I threw out the idea to Dane, who was also a Dogcast fan, “What if we try our hand in this?” We both loved podcasts, both loved cornhole. We already had chemistry and we thought we were incredibly funny! Perfect! So over the course of the next 2 month we researched how to set up a podcast, what equipment we would need and how the hell to get it uploaded so that people could (maybe?) listen.

About 2 weeks later I am driving to work, listening to the newest episode of the Dogcast and I swear to God, I almost had to pull over. They started talking about our show!! Here we were, two brothers doing this cornhole podcast thing with ZERO expectations and two “cornhole celebrities” (I mean “The Voice” has his face on a t-shirt for God’s sake) were mentioning our show!!

After that Dogcast episode….The Big Asp Cornhole Podcast EXPLODED!! Hundreds of downloads were pouring in! We could not believe it! I would reach out to Pro players to see if they would be interested in being interviewed, not expecting a response. Not only would they respond, but they would give us praise and told us THEY were fans of OUR show.

Then, we established a relationship with Cornhole Addicts, who would become our first SPONSOR!! We were thrilled to be associated with a brand that represented everything we wanted our show to be about! We were now those guys with sponsors on the back of their jerseys!! Our minds were officially blown!!

We have interacted with cornhole players around the world, became friends (more like much younger brothers) with the Dogcast guys (Brendan and Donnie), have interviewed some of the best players in the world and are about to participate in the “Battle of the Big Mouths (an online, live streamed tournament with some of the biggest names in the cornhole media world). The entire experience has been a whirlwind.

The cornhole community is amazing. Hands down the best group of people I have ever had the pleasure of interacting with. The support we have had is overwhelming and we cannot thank each and every person enough.

Although my wife might be annoyed by my new found addiction (I love you Valerie), we are having a blast! We will keep producing audio gold!!

Keep throwing it straight and I hope it’s nothing but four baggers from here on out!!