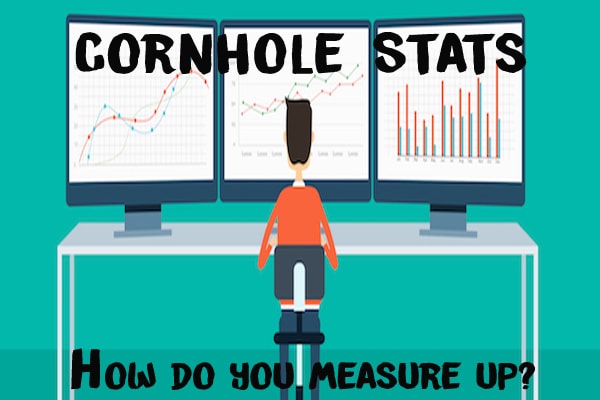 Cornhole Statistics, how do you measure up?

How can you get better and accurately track your own progress? Maybe you’ve seen the stats they put up at the ACL. And wouldn’t that be sweet? Some dude scoring your games and sending you graphs afterwards so you can review it in your cornhole film room? But alas, you can’t afford a cornhole butler.

Have you seen these statistics?

Have you seen these statistics, though? If you’re anything like me, you looked at them and you were scratching your head wondering why you ever even bothered to do your algebra homework in middle school. In other words: uh, I don’t get it. I mean, I appreciate the effort of the ACL pioneering this, but if Ryan Windsor’s Average Round Score is less than 8, shouldn’t all these high level backyard chuckers that can beat Ghost 8 also beat the most decorated Cornhole master of the last few years?

I know, it’s a ridiculous notion. The statistics don’t take into account any kind of in-game situation (e.g., there were blockers and hanging bags to dodge or go around). The categories just aren’t very useful and they surely don’t reflect how incredible some of these players are. But in addition to that, it doesn’t help you, the non-pros, efficiently track your own progress to see where you stand against the best.

Let’s put blockers, bouncers, rollers aside for a moment and measure this from a strictly sliding game perspective, how do you stack up against the best? If these guys are sliding in at a 75% rate and you couldn’t put 3 out of 4 in on an open board if someone paid you, it’s a good indication you’ll never take the podium against them. So how should we properly track these professional matches when so many bags clog and block and create a mess around the hole?

The simple answer is to ignore the messy shots (more on this in a bit). In boxing, judges score points by how cleanly punches land. I believe that’s what’s needed to track more useful statistics in cornhole: A judge to isolate board situations, categorize shots and then track the statistics.

But in the words of a famous philosopher Kimberly Wilkins, “Ain’t nobody got time for that.” Luckily for you, though, you have a couple of resources to go off of: 1. Some stud cornhole pros like to play Ghost cornhole and 2. I am a certified nut bag that has tracked certain statistics for certain games.

Let’s first talk about Ghost cornhole (click here for an explanation of it). But this latest trend is an awesome way to measure yourself against some of the best. It’s such an easy measuring stick. Follow this brilliant logic: Noah Wooten and Derrick King beat Ghost 10 frequently, you never have, therefore you’re not good enough, so get better. The end. Easy!

Now onto some real numbers to measure against your own. If you want to add to my collection of statistics, please do! Here are the simple instructions: keep it clean, ignore the messy shots. It is very much like the life of the aforementioned boxing judges. Some of you might watch the same games and might not count something as cleanly as I do.

But it in the end, we’ll have roughly the same numbers. So let’s say, I want to track Isidro Herrera’s slide in rate. I’m watching a match and counting every unobstructed slide attempt. I’m not going to count tough sneak arounds, or bully bags, or bounce offs or push throughs. And luckily for us, there are plenty of “all offense” players out there to track how consistently they can just slide that bag in. Yes, I understand some players go on hot streaks and these anomalies need to be taken into account but Herrera is known as one of the most consistent performers. So I believe this one game sample was a good indication of “world class” play.

How many times would I have to hand you a set of 10 bags to slide 9 of them in? Yeah, I know, so tempting to quit isn’t it? More like anyone can play, anyone can lose–am I right?! How about an airmail example? Sure! I got you! I have no life! Remember Jimmy McGuffin’s air show as he and Josh Lunsford took down an ACL Doubles National title? Yup. I tracked it. Now keep in mind, Jimmy was shooting out of his mind so this is probably an anomaly. I’d rather use the average I tracked when I did film for James Baldwin. He airmailed at a rate of about 67%. But ready to see Jimmy’s numbers for poops and giggles?

Fun fact. McGuffin started sliding again! I guess folks started leaving hanging blockers to send him off his rhythm. Anyhow, how about a blocker stat? I tracked the hottest hand in the ACO for a recent Major in Virginia: Erick Davis. His blocking game is absolutely crucial for his hop and roll shots to be effective. So it’s no surprise what stat came out of his winning game.

So what do you do with this information? Well, it allows you to be more honest with how much work you need. Talk a big talk and believe in yourself all you want as you take the trip to challenge these all world studs, if these numbers aren’t happening for you, you need work. Whether it be muscle memory or mental endurance–just get on it! In the meantime, track some games and just marvel at the consistency and efficiency of these players. Remember that Steph Curry stat I shared? Well an airmail is only TWICE as far as a free throw. Food for thought about this often ridiculed sport of ours! See you on the boards you Addicts!