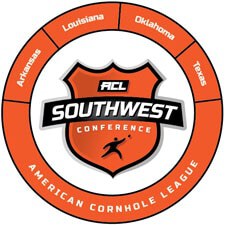 I am ACL Pro AJ Sims from the South-West Conference and this is my story of how I became a professional cornhole player for the American Cornhole League.

I am Justin Stranger ACL Pro from the Atlantic Conference and this is my story of how and when I started playing cornhole and worked my way up to an ACL Pro. I am a high school student and a professional cornhole player. I’ve been playing for approximately 3 years.

I partnered with Shawn Smith in the Pro Doubles Division for the 2019-2020 season. I am partnering with Tony Smith in 2020-2021 season.
I got my start like most people did, playing in my backyard with my dad on bouncy boards with corn bags and sometimes at breweries my dad liked to visit until someone from his work invited us to play some blind draws. In August 2017, my dad and I started plays $5 blind draws with handicaps on Monday and Thursday with Carroll County Cornhole run by Brian “Fitz” Fitzsimmons. That is where I met my cornhole mentor, Bob Mallonee, who is also going pro this year. Once I started mastering some of the basics, my dad and I started playing in tournaments, mostly in social divisions, if they had them. Around 6 months in, I started to get pretty good and people were asking my dad if I could partner with them. I started having some successes, which included placing in and winning events. I then heard about COBS and really wanted to go. My dad kept saying “let’s see.” In June of 2018, there was a local tournament called “Jack Taylor” that had juniors. My goal was to win that and prove to my dad, I should go to COBS. I came in second. However, I played in the competitive division with a another non-pro and we finished 4th in a group that included Timmy Pitcher, Leston Allen, Frank Modlin, John Kitchin, Jordan Camba, Jay Corley and other high level players. After the event, my dad said we were going to COBS because even though I was not happy with my junior’s performance and seemed down, my dad was proud of me for fighting back, never quitting and playing hard in a stacked division. I went to COBS, went 3-2 in Junior’s singles. My dad and I met a lot of good people, got a lot of advice and I fell in love with cornhole.

So we decided that in 2018, I should focus on the ACL and the Junior’s division. In my first month of the season, I was fortunate enough to be able to play a Regional with ACL Pro John Kitchin (still one of my favorite players), who I thank for taking a chance by playing with an unknown 14 year old. Early in the season, I had quite a bit of success in singles and doubles early in the season with Zach Owings, which helped each of us start to show our skills. I wanted to root him on at the ACL National College Championships that December, so my dad went on a search for someone to play with me, since Zach could not. He was able to get Seto Soto to play with me. We did pretty well and it enabled me to play against some top level players that I had been admiring.

During the rest of my first ACL season, I generally partnered with very good advanced players and ACL Pros, which included Ryan Smith, Dylan Wood, Matthew Morton, Leston Allen, Eli Stevens and my now Pro partner Shawn Smith. I capped my year off by winning the Junior’s Championship and on the way home, my parents and I talked and decided it was time to let me go Pro. So, here I am, an ACL Pro. I am looking forward to playing a sport I love, being an ambassador for the sport and teaching other to play the game, like the players in my cornhole club I just started at school.

Oh and just so you know, I still play some tournaments with my dad and I still play with Carroll County Cornhole, but we’ve gotten rid of handicaps because there is no need. There are great players there that challenge and push me. If you’re ever in my area, I recommend coming out to play with us on Tuesday nights! (Once COVID restrictions are over)

Airmails
Roll/Flop
Slide
Under the leg shot
shooting from the knees
Opposite hand
Blocking????