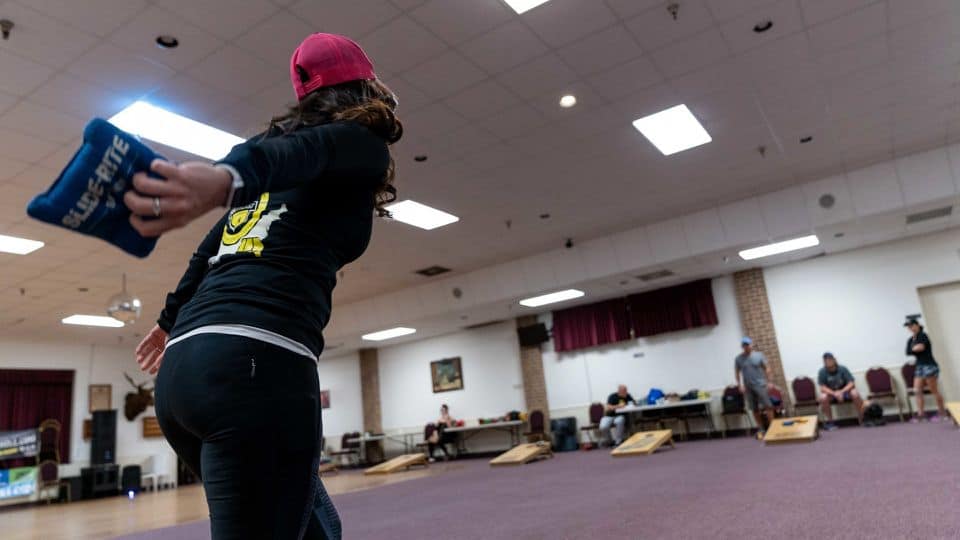 Ok, so you bought a set a cornhole boards, maybe even a set of good bags from your favorite manufacturer (this is not the time to raise that debate). You play on the weekends in the backyard or at family gatherings. And you’re starting to get pretty good. Now it’s time to put your skills to the test. So you want to enter a local tournament but there’s one problem, you need a cornhole partner.. What to do….

Well here’s how I found a cornhole partner

Like just about everyone, I started to throw in my backyard. I saw some drunk people playing at a NASCAR race and thought “that looks like a good time.”  I went home and built myself my own “custom” set of boards using 2 x 4 frames and whatever plywood I had in the garage. They weighed about 60 lbs a piece. Then, I bought a set of corn bags (didn’t know about other options) and I was ready to go. Later that day, a good friend came over to help me spackle a hallway. After realizing that neither of us had any clue on how to spackle, I said, “hey, check out these cornhole boards I made”. Without even realizing what just happened…… I have a cornhole partner.

We’d play one on one just about every weekend for months. We were the best team out there. Only one issue with that statement. We weren’t actually “out there”.  We would hear about a tournament coming up, a mere 2 hour drive away for a $1000 first place prize?? That’s a no brainer.. Absolutely, we are taking that drive and winning that money. And so the practice continues. Every weekend we were throwing bags, bags, and more bags. Heck, we’re ready and there is no doubt, that first place prize is ours.

Now it’s tournament day, 6:30 a.m. and me and my cornhole partner are on the road. We spend the drive talking about what we will do with all the money we’re about to win. We arrived at the location. Boards are set up, bags are out and flying. The sun is shining..It’s gonna be a great day. Time for warm ups. We pick up the bags and start to throw. Feeling good. One in the hole. Two on the board. 4th bag? Yeah, don’t ask.. But, hey 5 points in a round, that’s a great round. (or so we thought). Little by little, the place is getting more crowded with players. Real players. We finished practicing feeling good about ourselves. I began scouting the competition, thinking “damn, did we just drive 2 hours to get destroyed”? No way. Not us.. We are the best team “out there”. (see previous reference to that statement)

Practice is over. Now it’s time. Here we go. Me and my cornhole partner are ready to do this! First round, we get called in the first set of matches. Walking to the boards feeling cocky. The mandatory fist bump to intimidate our opponents. They have no idea what’s in store for them. Game on. And just like that, we’re down 16-0. Hmm. This can’t be right. How did this happen? Needless to say, we lost. 21-2. Second game, same result. Off to the losers bracket, and a long wait til we got called to play again. We managed to scrap a couple of wins together in the losers bracket before our demise. Well, That’s it. It’s over for us. No first place. We didn’t even finish in the top 20. They all just got lucky. Actually, no, we just sucked.

Good in the backyard doesn’t equal good in tournaments

My cornhole partner and I threw together for a couple more years after that. We experienced moderate success ( if you wanna call it that). We never won a tournament. 3rd was our best finish. We did manage to qualify for a tournament in South Carolina on the flight deck of an aircraft carrier though which, on a side note, was one of the coolest things I’ve ever done. Yeah, we went 2 and out down there. We grew apart as players and it was time to move on. Now, how the heck do I find another cornhole partner? That’s the burning question.

I would attended blind draws, local get together, anywhere people were throwing, just trying to put myself out there in hopes of finding a cornhole partner. I was asked to be the partner up with someone  at a local PBA fundraiser. Awesome! This guys a player. His whole family are players. I’m set. We finished 7th. Not the finish we had in mind obviously. I played like complete s**t. Completely my fault. But, it happens. No one can be perfect with every bag right?  Needless to say, that partnership ended after that one fundraiser. He has since retired from the sport. (No, he didn’t retire due to my performance that day) Back on the hunt. There has to be someone looking for a mediocre at best cornhole partner. Light bulb goes off!! I know. I have a good friend that bowls ( on my bowling team, actually), I’ll ask him. Nope, he’s never played. That’s no excuse. I’ll teach him. I mean, after all, it’s just like bowling. Or, is it?

So, a return to the backyard. We spent days, nights, weekends throwing. I taught him the strategy of the game. (yes, there is a strategy) This guy is good. Consistent, he plays smart, and best of all, he can put the bags in the hole. I think I finally found my cornhole partner. He’s ready to take the next step. He’s tournament ready. I find the next tournament on the calendar, register our team and here we go. Once again, the feeling of “We got this”, is overwhelming. I’m somewhat of an established player and I got myself an unknown. But hey, he’s a ringer! Its gonna be ok. We’re gonna do great things. Win a couple tournaments, make some money. We will be legit players in no time.

We breeze through the first round, having only given up a total of 8 points in two games. Confidence is at an all time high. Second round we are paired up against an extremely good team. It’s all good. There’s no doubt, they are scared of us. Then… Disaster strikes. This guy cant hit the board. And I’m not playing much better. What happened?  Is it possible that history is repeating itself? Yup. Absolutely Yes. To the losers bracket we go. And as if it couldn’t get any worse, we lose our first game in the losers bracket. We’re out. The day is over. As the frustration mounts, the blame game started.. Well, I’m not dealing with that. In this game, you win as a team and lose as a team. Another end to a partnership after one outing. Worst part? I still gotta bowl with this guy every week. At least the next 4 weeks anyway, as he decided to quit the bowling team. Back to square one. No cornhole partner. Now what?

Since my bowling team fell apart, I was left with an open “guys night”. I found a couple of local tournament directors that have a cornhole league. There’s a league for cornhole? I never knew there was such a thing. I have to check this out. There has gotta be someone that needs a cornhole partner there. First night of my new league. I’m excited but nervous. I walk in to find a lot of people I already know for various tournaments. Also a few unfamiliar faces. The format was explained to me and it’s time to throw. 6 game with 6 different cornhole partners. Pretty cool, I get a new partner every game. ( a familiar feeling to me as of late)

Between games there is a small group of people talking. I listen in to see if I know what they are discussing and if I could add to the conversation. There is a guy saying that he’s trying to find a cornhole partner who doesn’t mind traveling to play. WHAT? No way!! Now, I’ve seen this guy a couple times before but I had no idea what his name was. I knew him only as “Chippers brother”. Completely out of character for me, I interject myself into this conversation. “I’m in, where are we going?” The look on Chippers brothers face was priceless. Who the hell is this dude?  Then he replied, “Are you serious? Delaware, Saturday morning” I’m in. I’m gonna go to Delaware with this guy who I only know is Chippers’ brother. (By the way, I’m referring to Dickey Stiffler here)

A few days later, me and my new cornhole partner are in the car traveling south to play in a tournament together. We don’t know the first thing about each other. Never even threw together. It was like Dickey picked up a hitchhiker along the New Jersey Turnpike and said, I’ll just throw with this guy today. Somehow, we ended up finishing 4th that day. We’ve been partners ever since. (3 years now) A couple of tournament wins, a few 2nd place finishes and plenty of tournaments that we’d rather not discuss. Sure we’ve had our bad rounds and bad days but, as stated earlier, in this game you win as a team and lose as a team!

So listen, you will go through different cornhole partners, with different styles, and different strategies. No one is the perfect player. Everyone will have a bad round, a bad tournament, a bad day and possibly a bad week or longer. It happens. It’s just part of the sport, just like any other. Perhaps the key to the perfect cornhole partner is finding someone that you’re comfortable throwing with. Someone that makes you a better player. Someone that will challenge you. Someone who can calm you down when you’re in your own head. And most of all, Just go out there an have fun. Play with passion. Try to keep your frustration (there will be plenty of it) under wraps. Let the bad shots go and always believe in yourself and your partner.