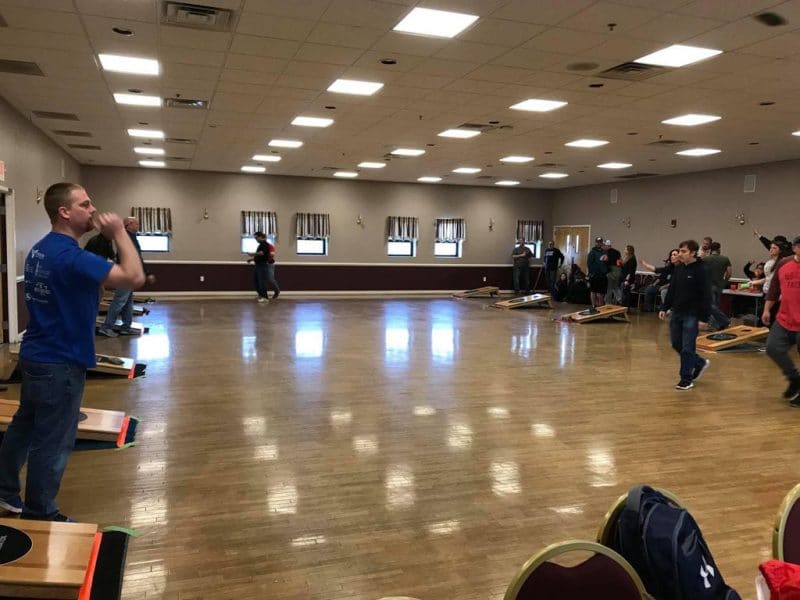 So Slim says yes to be my partner (which I’m sure he regrets today). First road trip is to Delaware and Minquas Fire House. Guaranteed $1,000 to first place at $50 a team. It’s the best $25 I’ve ever spent in my life. My first experience where the house loses their shirt. 24 teams show up, so you can do the math from there. And, it’s a Fire House Fundraiser with 0 teams from the firehouse (I’ll do a blog on fundraisers later).

I wasn’t just going to the tournament with my new cornhole partner, was also going to support my first “big” customer. They bought 4 sets through Chipper (my brother brokering the deal) at a price that I will never say how much I did them for. At that time, it was Kitch, Bryan, Drew and Farva as the owners of Delaware Cornhole. What I didn’t understand is the level of players I was going to play against.

My partner and I are ready to win

My partner and I roll out of the car motivated as all heck. We both kicked ass in league on Tuesday and did well the last tournament, so we are pumped and we got this. We start practicing with some dudes wearing Bag Bully shirts and they are shooting well. We have no clue who they are, but they are throwing airmails for every bag that we slide in. We think, okay cool, we got second easily. Glass half full mentality.

The first game, we get this older guy and younger guy. The younger guy has ear buds in which was very strange to us, but we are legit as all can be. Slim is shooting against the younger guy and I got his father, LOL! I roll out with blocker after blocker that keeps getting pushed in. Granted, they are not actually “blockers”, I am just throwing short. Now, we get out to a 14-0 lead, I told you we were good, wink wink. But lucky for us, this tournament was a best 2 of 3 because we ended up losing our first match, 21-14. But that’s ok, we are still in it and we got this! Our second match, we get smoked, 21-4. I don’t remember that match, but I’m sure it wasn’t as epic as the first match. 0-2 we go, the first of many.

Thinking we were completely out of the tournament, we find out there is a “lovable loser bracket”. What is a lovable loser bracket you ask? Well it is awesome. You take the first “x” amount of teams out and they get a chance in a second bracket with people who didn’t succeed like themselves in the main bracket. Looks like we get another chance to redeem ourselves, or so we thought…….

As we are waiting for more games on the loser side, we watch some games. We are mesmerized by some big lefty from Virginia and his partner who drove in from Kentucky. Really? We are in Delaware which is like a 10 hour drive for a 12:00 start. Why would anyone drive from Kentucky to play cornhole in Delaware?

We get called for out 3rd game in the lovable losers bracket and who is it against, Dicky and Diane. Dicky and Diane are a totally beatable team looking at them, or so we thought but learned to never judge a book by its cover. Diane is as ruthless as they come on the boards. She smoked me and Slim didn’t do so well on the other end against Dicky.

So we are now officially losers in our first event in Delaware. But what we now know is when you get called against Team Lander, you are in trouble. From that experience we became very good friends with the Dicky and Diane. Don’t let Diane fool you, she will kick your ass and then be extremely nice about it.

We played against top ACL Pros

Looking back, we played a 20 team event with some of the best players on the East Coast. We later found out those Bag Bully dudes were Michael Lucas Jr and Michael Dinges. Talking with the younger dude I find out his name is James Baldwin and his partner is Allan “Rocky” Rockwell. John Kitchin played with Timmy Pitcher and then they lost to the Big Lefty and the Kentucky guy which turned out to be Jordan Camba and Derrick King. All players mentioned above are currently ACL Pros and some of them are featured right here on our page. Click their links to check out their profile pages.

How’s that for a first event as legit partners? Camba, King, Lucas Jr, Dinges, Kitchin, Pitcher, Baldwin, Rockwell, and other players not mentioned who are legit great players. 8 ACL Pros at our first event as partners. Insane!

What I did learn is that I’m not nearly as good as I thought. But I also learned the guys from Delaware run a great event. Delaware cornhole has hosted great events every time I’ve attended. The ownership may have undergone some changes, but their consistently has not. Dutch Destroyer was my most memorable event to date.

Check out www.DEcornhole.com for all their events and the leagues they run 5 days a week across the state. The boards they use are very good, either mine or Underwoody boards. I’ve got some friends for life in Delaware, keep it up Brian, Drew, Mike, and James.